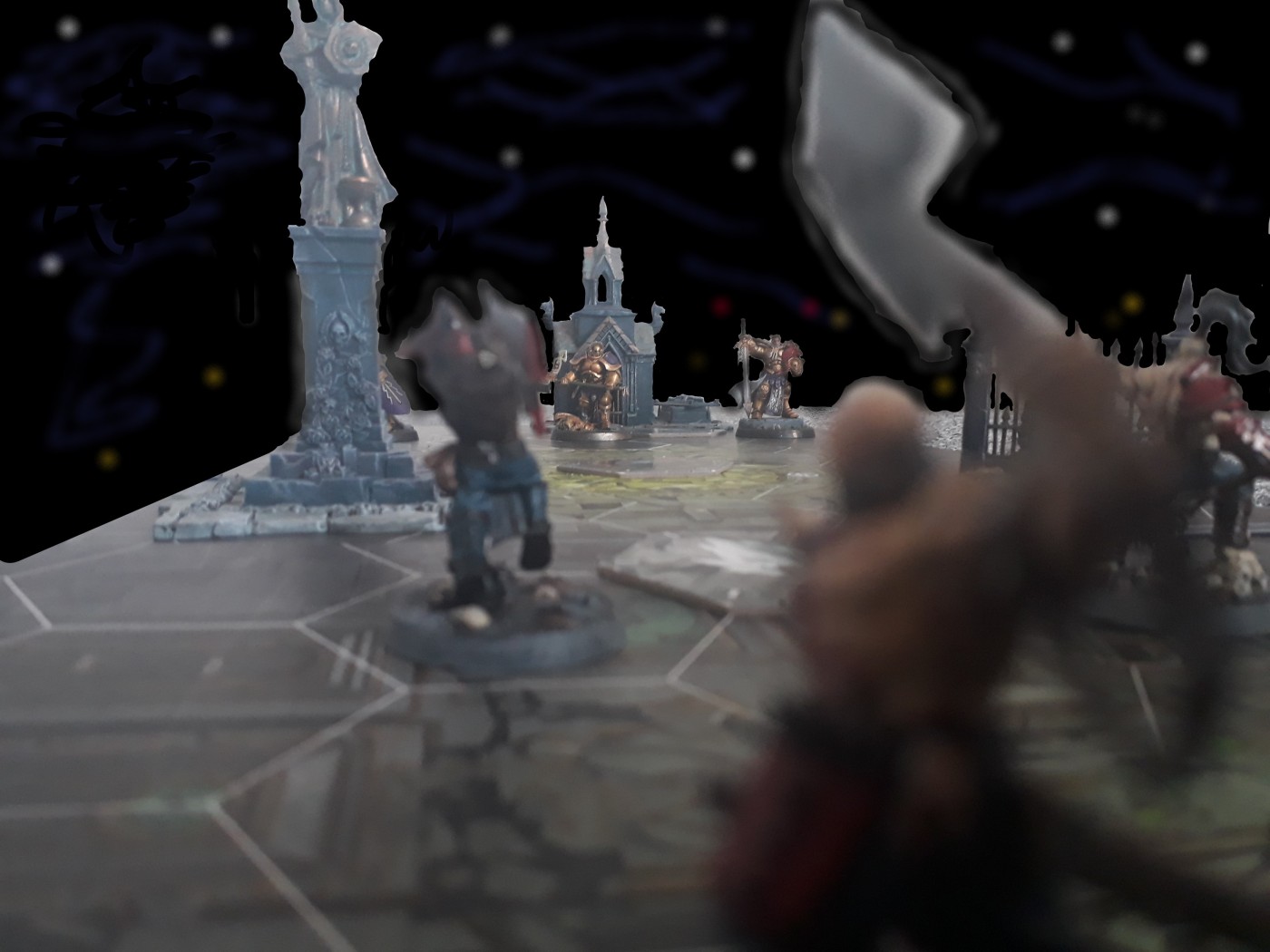 Confessions of a disgruntled Khorne player

After blazing through two rounds of the tournament with my 12 score immediately objectives and every +1 damage ploy under the sun, I headed into my third game in awe of my own talent and skill. As I lost the roll-off for board placement, I joked about how lucky I was to get three objectives (top banter). That was when my opponent did something unexpected. He lined our boards up with the short sides facing each other.  As I struggled to comprehend how my opponent planned to score annihilation by turn two with the boards barely touching, we began deployment. My opponent began deploying at the back of his board?! These were spawn hexes I’d never even registered before! The number of hexes between our models was higher than I’d ever managed to count. As I began to use the fingers on my second hand to try and make sense of this madness, the game began.

4 actions, 4 models, 4 moves, 4eva. Ughh the first turn was dull. My opponent spent the turn drawing cards (didn’t know you could do that but why would you?) and lining his models up next to eachother (pfft not gonna score any glory like that!). At the end of turn 1 I’m in range for a charge at the top of the next round. Suddenly my opponent plays a ploy, he says its called great concession or something. I remember seeing the card when I bought farstriders, but there was a lot of text on it and nowhere did it say +1 damage so I figured it was trash. Suddenly there’s 2 more hexes between my models and his! And if that’s not enough, apparently there is a point for lining your models up! I look at my 4 upgrade hand I didn’t mulligan because I expected to have killed his models twice by now. Pathetic.

I win the roll off for the first activation, all part of my fool-proof plan. One model is still in charge range, so I fly in with my leader to paste the sucker. As I pick up my dice my flustered opponent drops a card out of his hand, I relish watching him panic. Then he starts moving his fighter out of range of mine. I refrain from pelting his smug face with my dice as he gives me the dropped card to read. I slowly read Quick Thinker, before quickly overreacting to the slow pace of the game. I spend the rest of my turn watching my leader get gangbanged cause apparently, he still counts as having charged. I furiously discard Total Annihilation, which I’d been holding since turn one, along with Denial and Contained and end up drawing Victorious duel, Annihilation and Pure Carnage.

I don’t want to talk about Turn 3.

I go to my next game and I’m matched against an objective Sepulchral Guard deck. Finally, an honourable opponent who knows how to have fun.

Defensive decks have become as popular to hate as Justin Bieber, maybe even Jedward. You look at them and wonder how on earth they are allowed to be successful. This article looks more specifically at how to build your objective deck to be prepared for the passive scourge. I’m looking to write additional articles on the power deck and actual in game strategies to employ once the deck has been built.

It’s importance to emphasise that decks are built on a spectrum from defensive to aggressive, and this article assumes the opponent is batting pretty heavily for the defensive side. It’s also important to remember that whilst a deck can put you at a specific point onto that spectrum, how you choose to play with that deck can alter things even more! The purpose of this is to give some ideas on how to adapt an aggressive deck to beat a defensive one. I’m also just one player with my own experiences, so read my suggestions and take on board what you find useful, but please don’t take it as gospel. I should not be trusted with that kind of power.

Anyway, vague disclaimers out of the way, lets get into the objectives to include!

If you only take one piece of advice from this article, I reckon it should be this. Get your 12 objectives out in front of you. Which ones can you score on turn 1 if you don’t get into a fight with your opponent? Escalation’s out. Master of war isn’t going to happen. In most decks you’re begging to draw ploymaster, which you can’t score because all the ploys in your hand are reactions which depend on fighting! You will not stand a chance if your deck cannot reliably score glory on turn 1. This means having a few backup objectives just in case the rest of your deck fails to propel you into a successful combat from the off. If you can get into combat early and start the snowball then wonderful, you’re off to the races! But if you struggle, you can at least score 1 or 2 glory for that “Ready for Action” activation next turn.

Generic cards that fit the bill for most people 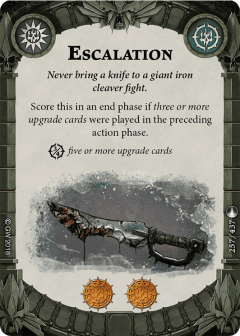 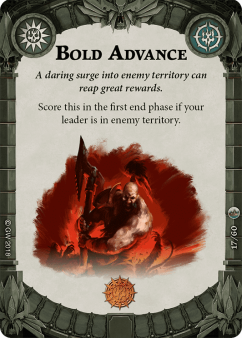 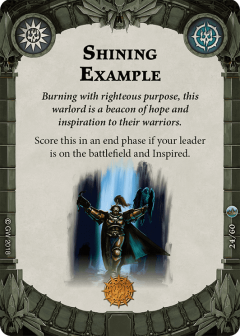 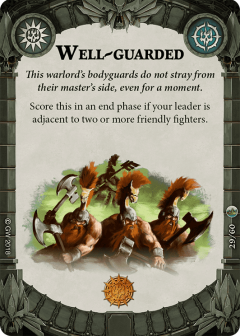 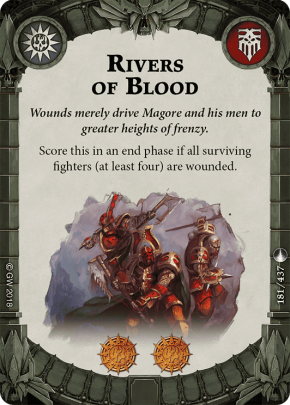 Come the end of turn 3 you can try for a big cash injection of points. If you’ve managed to hold the enemy in their board (watch out for a cheeky end game hidden paths!) you can cash in on denial. Plus if you’ve managed to nab a kill and a few of your passive objectives then superior tactician may be in your grasp.

Be aware defensive decks score easy glory but have a much lower total glory cap. They will spend the whole game trying to contain your income from a distance, and playing against these decks is all about trying to break away and get the snowball rolling. Turn 1 is the turn you have to endure, but if you can through it with a couple of points, then your combat upgrades and ploys can start to tip the odds in your favour afterwards.

Obviously when building an objective deck make sure there is a degree of coherency and that it is versatile. If you’re planning on winning some glass you are going to come up against a variety of strategies and you need to be able to adapt to them. As this article has stretched on longer than the board you dread playing on, I’m going to leave it here for now and write my power deck advice at a later date. I hope I’ve managed to be at least slightly though provoking and convinced people to consider some new objectives in there deck. Always remember you don’t have to wipe out the enemy, you don’t even have to score every objective in your hand. You have to end the game with more glory than your opponent, make your decisions accordingly.

Thanks for reading and let me know if there are any questions or advice for the future! I’ll take any help I can to get me across the board and into the battle!

See you next time!

( I put so much time and effort into that featured image that i have to use it. I acknowledge i probably could have asked my cat to take a better picture, but I’m in way too deep now)

8 thoughts on “Breaking the Bulwark: Part 1, The Objective Deck”