Alongside the Warhammer Underworlds: Shadespire – Leaders expansion (see my initial thoughts on the spoilers for this here), next weekend will also see the release of the first new boards for Warhammer Underworlds: Shadespire with the Shattered City pack. The Warhammer Community team posted a preview of this expansion last week – here’s a few belated thoughts on how it might affect your game. 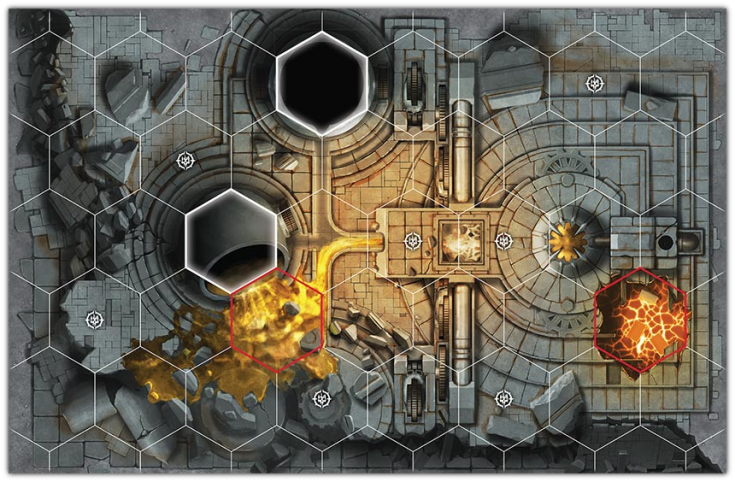 Let’s get the bad news out of the way first – the expansion is £15.00 RRP (€20.00 / $25.00). That seems way too high for a single double-sided board? Games Workshop products generally have a premium price point, but this feels exceptionally . The new boards will need to be a major game-changer to be worth paying almost the same amount as a new warband (and more than the new card expansion).

The big difference with the new boards is that they have a new type of hex – “lethal hexes”. These cause 1 damage to fighters passing through them, essentially giving you some limited-use Shattering Terrains. We’ll have to wait for the boards to be released to see when this happens – is it on moving in or moving out (or both)?

This is an interesting precedent, and I can see future expansions adding even more types of board effect – cover hexes that let you re-roll a defence die, difficult terrain hexes that cost an extra movement to leave, and so on.

For lethal hexes, I think the effect on your opponent’s positioning is bigger than the actual damage. You’ll want to stay more than 1 hex away from them to avoid giving away free damage from push cards, and generally try to route your charges etc around them. There’s some fringe benefits for doing the opposite with Ironskull’s Boyz and suicide Khorne, but I don’t think it changes much for what are fairly middling archetypes.

Aside from the new lethal hexes, the Shattered City boards also provide more options for starting and blocked hex layouts. The glowing blue board (™) is nice for defensive lists if you win the roll-off – you’ve got 3 edges hexes clustered at one end with spaces between them – great for Skirting Danger, Alone in the Darkness and other passive positioning objectives and a good alternative to the core set board with the separated blocking tiles unless your opponent has ranged attacks.

Neither of the boards look great when you lose the roll-off. Even without the lethal hexes, you want to be able to hedge against your opponent’s positioning with starting hexes close to each of the 4 sides – that way you can make sure you’re able to deploy close or far away depending on your play style.

The Boards In Practice

I don’t think most aggro lists are going to want to use these boards (although some of the most well known aggro players seem to have plans for them – it’ll be interesting to see what they come up with), and I also don’t think you’re going to want to pick one of the Shattered City boards when you lose the roll-off for board placement – you need to be determining where the lethal hexes are in relation to you and your opponent’s fighters, not letting them do it.

Most aggro lists are looking to get into their opponent’s territory as soon as possible, so having lethal hexes in their own territory is of questionable value. For defensive or hold objective decks there is some value in dissuading attacks, but you’re also exposing yourself to potential sources of damage which seems kind of loose.

As someone who primarily plays decks on the more defensive side of the spectrum I don’t even think I will be picking one of these boards most of the time, although as mentioned above the blue one is a good option against everyone other than Farstriders when you win the roll-off.

In general, you’re probably safe passing on this expansion if you can’t justify spending the £15. Unlike card expansions you really don’t get that much, and unless you’ve got a particular gimmick build in mind I don’t think you’ll want to chose either of the new boards in enough situations.

That aside, I’m looking forward to seeing how the community makes of these options, and hope to be proven wrong on how good they are. I also hope to see more tournament write-ups and strategy articles touch on board choice as it’s a vital but oft-overlooked part of any strategy. Bring on next weekend!