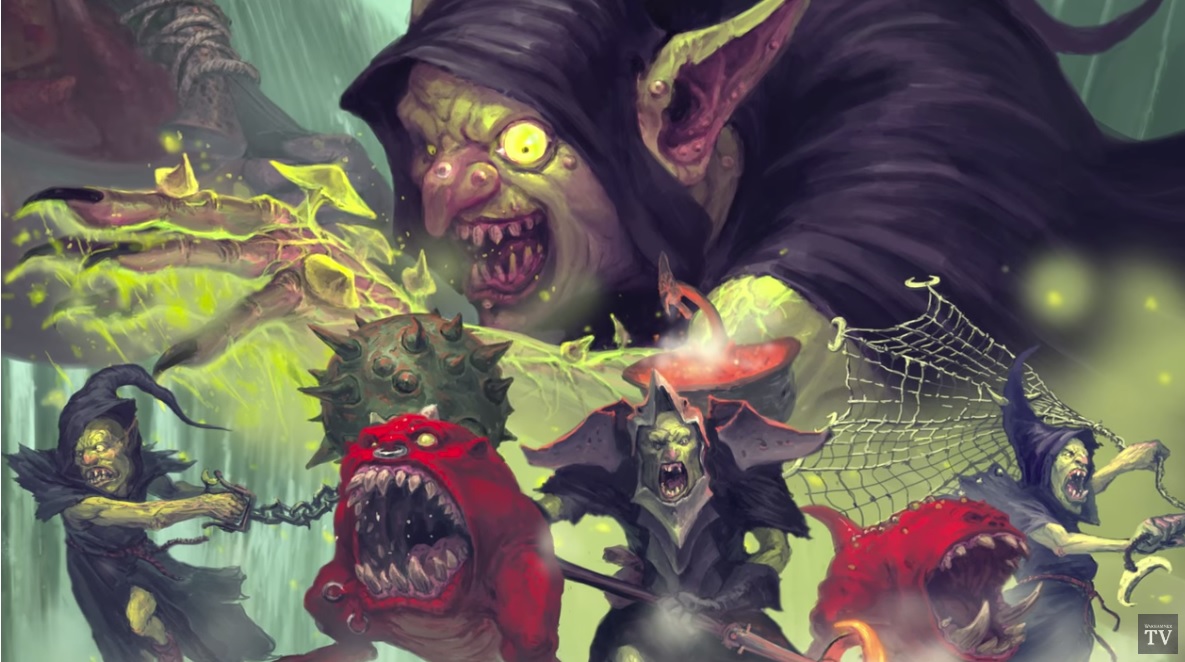 Hello again and welcome to the second article (part 1) detailing my misadventures with madcap marauders! Today I’ll be diving into what I have learned about boards, the effect the infamous BAR list has had, and covering some top card picks to include in your Grot deck. I’m gonna finish with some of the match-up specific lessons i learned from my latest tournament escapade. I hope you find this helps your multitude of lovable green skins to sneakily stab the opposition!

This article was also written in the interest of placating the resident taskmaster. Mike will not rest until I have written as many articles about Grotz as there are models in the warband. After playing my three sets against Magore’s Fiends, I found my favourite board to use against aggro decks. This board allowed me to set up lethal hexes at the enemy end of my board for a much-needed damage boost. You have to sacrifice one poor gobbo the enemies first turn charge (I recommend Dibbz), but you can always score Martyred as Riptooth mangles his latest chew toy. Plus, there’s always the chance your enemy misses his opening attack, and the master baiter Dibbz can cackle madly as his buddies’ line up for the counter charge.

When you lose the board roll off I tend to use the 3 blocked hex board, although I still haven’t got enough experience with losing the board roll off to definitively say this is the board to go for. I also struggle with choosing a board when you win the roll off against other objective warbands, although I tend to favour more aggressive deployment if the enemy warband is a hoard, versus a more defensive setup against lower model count warbands.

For setup on any board I recommend banging Drizgit and the Fanatic towards the front, with Zarbag somewhere in the middle. Avoid putting your leader near edge hexes if you can, sometimes Magore appears out of walls. To keep our squishy spellcaster alive, surround him with expendable goblins and empty hexes.

How did the restricted list affect our puny pustules? We’ll start with the good.

The not so good, unfortunately its not all moonlight and mushrooms…

After playing a few games with these critters there are a few cards that I have come to really appreciate. First off, my magic!

I have already mentioned Jealous Hex and Abasoths Withering, but hell they’re worth mentioning over and over! The reason being most enemies have 4 heath, and your Fanatic happens to be able to knock down three wounds. Maths. 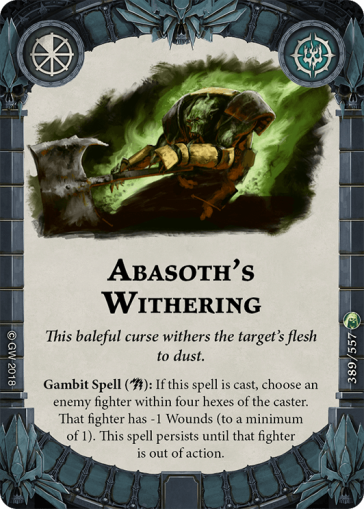 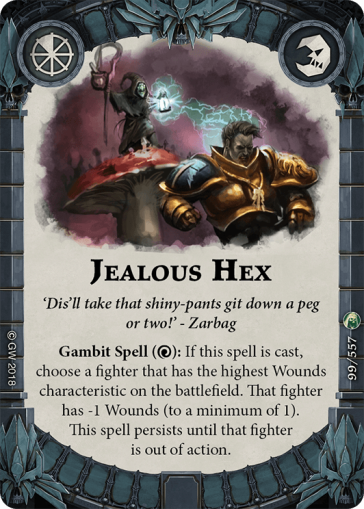 In terms of objectives there’s one I have a love-hate relationship with. Obliterated is such a big scorer if you can get it off, but sometimes your old ball and chain will meander into the the corner of a board stubbornly refusing to mash up the juicy Briar Queen right in front of him! Given the amount of push and ranged damage cards I now recommend including in a Zarbags Gitz deck, I’m feeling like testing this card out again. The 3 glory swing can instantly inspire your warband, I guarantee your opponent will find this very upsetting.

There’s nothing particularly ground-breaking about the other objectives I’m finding success with. Keep Them Guessing and Extreme Flank are free points with the Grotz. Superior Tactician is a brilliant card you could argue is worth including in every objective deck. Martyred and What Armour? are score immediately cards that (helpfully for the diminutive devils) do not require you to remove an enemy model from the game. Litter the rest of your objective deck with cards that suit your playstyle, whether that be defensive, objective or aggro! 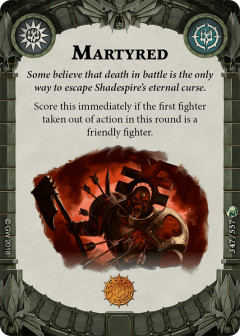 Cards like Encroaching Shadow combo nicely with your Gambit spells to chip away at health from across the board. After this I load my deck with pushes. These serve a multitude of purposes.

I’ve really come to appreciate push cards in a more objective focused meta. The ability to re-position in the power step can help disrupt enemy plans and cement your own. Scared of the Briar Queen using Sudden Appearance to ambush you? Quick advance over your spawn hexes to block her! Push an enemy off an objective and instantly hop on to deny enemy glory whilst securing your own! I may have gone overboard on these cards, but it’s working so far. 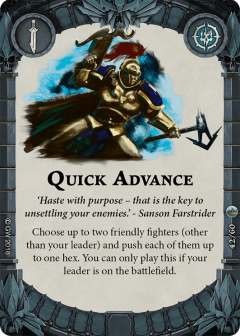 Given the inevitable glory bleed that comes part and parcel of running a high model count low health warband, you need to be able to dump out glory at the end of turn 3. Fortunately keys are now a lot more viable! With Hidden Paths + Faneway Crystal in the game, you can fly across the board for those turn three key shenanigans!

On top of this I’d recommend take extra wound cards and +1 Damage cards that aren’t restricted, namely Great Strength, Gloryseeker, and even Ravenous if you’re feeling squiggy! I also love Tome of Glories, as it is effectively a score immediately objective on an upgrade slot! The drawback of this card is it costs an activation which you may not have to spare. Most of the time scoring a glory is well worth activating a model for though! 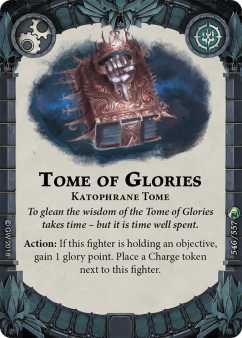 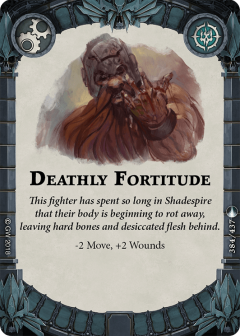 The last tournament I took the Gobbos to was at The Forge in Manchester. I played 3 out of my 4 sets against Magore’s Fiends and managed to take a win in all these games. The set I lost was to the Thorns of the Briar Queen. There was so much to take away from all of these games, firstly that Zarbags Gitz are definitely competitive, and secondly that I still have a lot to learn about piloting them! Bryce won the tournament in the end, pop over here if you want to see how he did it.

Needless to say this is a match-up I now feel confident in, especially if I win the board roll off. Long-boarding the Fiends means you can deal with them one at a time as they come for you. Long boards also make it much easier to zone control with the Fanatic.

General Tips are as follows:

An aside for anyone playing against Mike in the future. If you let him roll huge numbers of dice, he will inevitably miss everything. I used this tip to my advantage in both my games against him. I swear to god I am still salty about that – Mike

This was my first time playing this match-up, and I learned one thing above all.

So how do we fight this monstrosity??

Alternatively, you ignore her and use your Fanatic to rack up points on the enemies board by smashing up the smaller ghouls. Prog the Netter can come in handy for nullifying at least one attack from the Queen per round. The tricky thing is not letting the Briar Queen distract you from scoring your own glory, you can easily waste a turn whittling her down!

Unfortunately, by the time I learned these techniques we ran out of time on our set. We finished with one game apiece with us tied on 5 glory at the end of Turn 1 in Game 3. I was holding fewer objectives and lost the set, which was heartbreaking as this was the best start I’d had all series (my Glory tended to come out later with keys)!

Aside from the Briar Queen catching me off guard there were other things I could have done this game to help win!

I was gutted to not finish Game 3 given how much I’d learned over the course of the series and how close the games had been; however my opponent Tim piloted the bed-sheets infuriatingly well and deserved to take the win! If I want to win some glass with my Gobbos, I’m going to have to up my game!

I felt better after I beat Mike for the second time in one tournament though. 😉

The Future of my Fungi

I’m determined to get my head round these cackling cretins. My next article is going to be a joint feature with Mike. It’s very difficult to write an article about the nitty gritty of decision making during a game without devoting a lot of time to recording what happens every round and analysing it. We hope we can achieve this lofty goal with some in depth gameplay analysis in our next post! Sorry to be not give the game away, but I’ve got to…