The first Warband Preview for the next pair of warbands has dropped and we have seen our first glimpse of the rules for Mollog and his squig collective.

Mollog, the mountain, the myth, the legend.

Seven wounds from the off means that this behemoth is not going to fall to a one hit K.O., and it hits like a truck. Mollog is immediately the most dangerous individual fighter in the underworlds. Upon inspiration, four damage will drop almost anyone else without upgrades and being able to double charge will maximise impact. 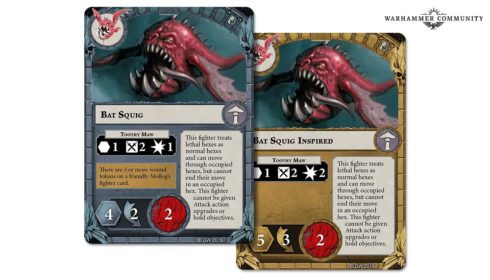 Fast and nimble, especially once inspired Bat Squig will not cause much damage, but can make a nuisance of itself.

Whilst in theory the attack all adjacent fighters attack is nice, I don’t feel that it will see much use. The reaction to dying is a much more useful ability for this essentially sacrificial fighter.

It’s behind you. An immobile fighter that can appear anywhere on the board before the first activation. Nice to set up Extreme Flank, or to place to threaten Skritch early, but unlikely to survive long if deployed on the opponent’s board.

With ¾ of it’s fighters unable to hold objectives, that play style is not viable for Mollog. They are likely to become the definitive midrange warband. Holding back in Round 1 to score early Glory and pile upgrades on Mollog, charging in to wreak havoc in Rounds 2 & 3

This is a first attempt, not taking into account any cards release in Mollog’s Mob (other than Got Them) or those in the Darkoath warband box.

At Steel City we would love to have your feedback. If you have something to say about a specific article then feel free to comment below, if you want to get in touch about the blog in general, or just prefer to communicate privately then you can get in touch by emailing us at team@steelcityshadespire.com